The photo was taken several years ago, when I had the joy of flying over Lincolnshire in a friend's tiny plane...

This blog is to accompany the Check the Box course offered by Janet Conner starting May 2013.
The title comes from the poem 'The Journey' by David Whyte (a favourite poet!), Janet cites in the opening lesson.
Janet speaks my language in so many ways...

'Shimmerings' are A-ha moments, things that resonate, or makes you gasp a little as your soul recognizes something... something that it knows is a gift. I first heard the word from Christine Valters Paintner over at The Abbey of the Arts.

I had several shimmerings yesterday...

It started with really looking at my angel, who stands on a ledge near our bed. She's been there for years, but for some reason, I really noticed her... 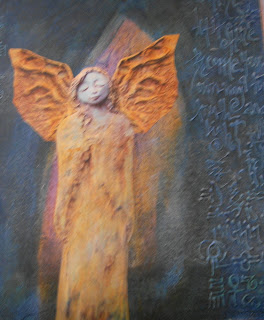 ... especially the words beside her:

'Shine, let it shine. Become your own way to truth and light'

Later, I read this in the Celtic Daily Prayer, The Witness of Aidan:

One word, one light, one person,
one life He loved enough
for Him to die.
And the love that died,
His love that burns inside me,
impels me on the road
to seek for Christ in the stranger's face
or feel the absence of His touch...
...
One word,
one light,
on person on the way.

And then, I read in Care of the Soul:

The Greeks told the story of the minotaur, the bull-headed flesh-eating man who lived in the centre of the labyrinth. He was a threatening beast, and yet his was Asterion - Star. I often think of this paradox as I sit with someone... searching for some way to deal with a death, a divorce, or a depression. It is a beast, this thing that stirs in the core of her being, but it is also the star of her innermost nature. We have to care for this suffering with extreme reverence so that, in our fear and anger at the beast, we do not overlook the star. (p. 24)

I grew up with the Classics, and Theseus and the Minotaur was one of my favourites, yet I never knew the minotaur had a name!!! I just thought he was a baddie that Theseus had to defeat. But look at his name, Asterion, what a name! Even this brute of a beast had a name that shines!

Oh my!! Shimmerings and synchronicities - lots to ponder and absorb :)
Posted by Claire at 1:54 AM

Thank you for taking the time to comment - I really appreciate it :)
I've activated comment moderation - to catch any spam - so your comment won't appear until I've read it, and publish it, so do bear with it...
Thanks again xx

Claire
I suffered a serious stroke over 10 years ago (aged 43 at the time) and it's been a slow, often frustrating, recovery... I lost my speech and was totally paralyzed on my right side, but with patience and regular physiotherapy, I can now speak, walk short distances, operate the computer, but my right side is still paralyzed. I get botox injections 3 times a year in my right bicep and forearm, which relaxes the high-tone muscles and makes it easier to stand and walk. Last year I started weekly sessions of hydrotherapy, where I build up the wasted muscles by exercising while supported by the warm water. It's bliss at the time, but I ache like heck next day - but it's so worth it :)